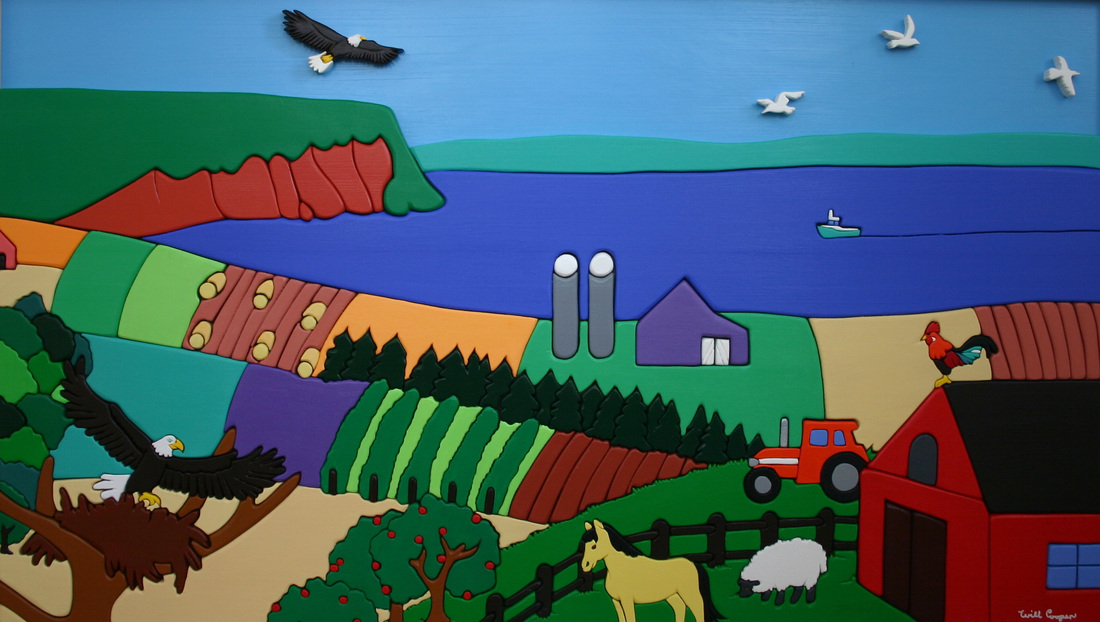 Wolfville artist Will Cooper was commissioned to create a unique wooden landscape for the children’s section of the Wolfville Memorial Library. It was unveilled Feb. 26 at a Babes and Books program meeting.

WOLFVILLE - On Feb. 26, the Wolfville Memorial Library unveilled colourful wooden artwork commissioned from Wolfville artist Will Cooper.
According to branch manager Lisa Rice, the acquisition was funded by the estate of the late Curtis Chipman, who was formerly the chairman of the library redevelopment committee.

Cooper's work is a vibrant blend of folk and fine art. The piece designed for the library hangs in the children’s area and features various aspects of the agricultural life of the Annapolis Valley, as well as Cape Blomidon.

Cooper was born in Shrewsbury, England. The young father of three is self-taught. He has developed a unique style that he calls ‘scroll paintings’.

He creates his art by drawing an image on a panel of wood, cutting the image into segments, sanding, painting and varnishing each segment, then gluing the segments back together on a wooden backboard like a unique puzzle.

Cooper’s work has been shown at numerous galleries and art fairs in Nova Scotia, including the 26th Nova Scotia Folk Art Festival. He is a member of the Hants County Arts Council, Visual Arts Nova Scotia, and the Nova Scotia Designer Craft Council.

Cooper is very familiar with the landscape around Cape Blomidon, he says, as each summer he works at the provincial park that tops the promontory.

Chipman, who died at the age of 99 in 2009, served as chairman of the campaign to turn Wolfville’s old train station into a community library. It opened in 1993. 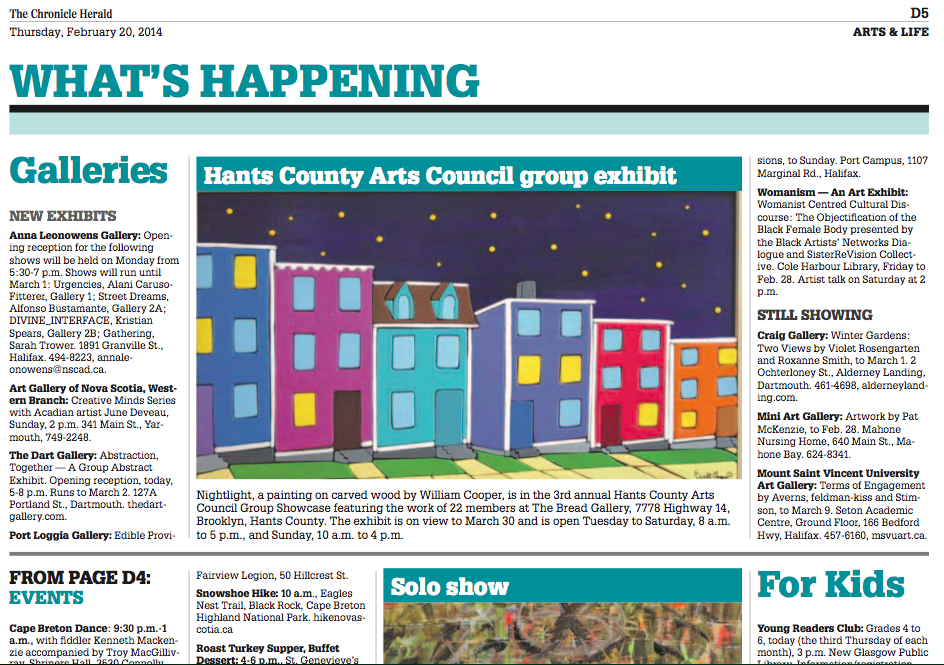 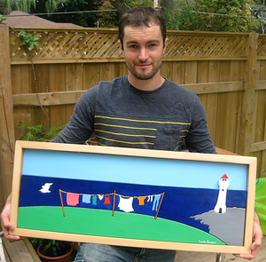 The Who’s Who – WILL COOPER: COLOURING OUR WORLD!
Posted on Tuesday, September 24, 2013

Sometimes a Who’s Who is just a few steps from my front door…literally! Will Cooper appeared at my yard sale last year on Chestnut Ave to buy things “to distract the kids” while he moved into his new house, just a few doors down. And now Will’s my newest Who’s Who!

Will Cooper was born in England but grew up mostly in Canada, first in rural Manitoba and then Nova Scotia. Moving around and travelling became two of Will’s biggest “hobbies”. He’s lived in Sierra Leone, France, South Korea, New Zealand and Australia. After six years in New Zealand, Will, his wife Jen, and their two sons, Forest and Asa, moved back to Nova Scotia. Oh, and I can’t forget their bulldog-lab mix Kaia, who loves Wolfville just as much as Will and his family. Will says, “It seemed like a good place to raise our boys: small, alternative, attractive, close to Halifax and full of friendly people.”

Will has had a variety of jobs. He’s worked as a travel advisor, a phlebotomist, a librarian, an ESL teacher and an environmental studies lecturer, amongst other things. Currently (no pun intended), Will is working as an electrical apprentice, which he finds interesting and (when he’s not crawling around in a scorching-hot, dusty attic) practical. However, Will’s real passion is art. His dream is to be able to do art full-time—or perhaps half-time, so that he can spend the other half with his wonderful family.

Last April, Will began experimenting with a new style of art, where he draws images onto large sheets of wood, cuts them out with a scroll saw, sands them and then paints each piece of the image with a solid color. He then varnishes and glues all the pieces back together on a backboard, like a huge painted jigsaw puzzle, and the results are incredible. They have turned into a brilliant and vibrant collection of scenes inspired by the Nova Scotian landscapes we’ve all grown to love. Now YOU can see Will’s wonderful folk-art flavour at the Wolfville Library, where his art is being displayed until September 30. And Jen has helped Will create a website to promote his art, www.willcooperart.com. Check it out!

Will says,“I’ve been receiving a lot of positive feedback about my work, and half of the pieces I’ve made have already sold and I have just been commissioned to do a new piece, so I am doing what I love and it’s paying off.”

In his spare time, which comes sporadically, Will enjoys building, renovating, and spending time with his boys. When the in-laws look after the kids, he loves to go swimming at Lumsden pond and have café time with Jen. Will loves to write as well, and has written many newspaper articles, worked as an editor, and written a fantasy-novel manuscript and several children’s book manuscripts, including a finalist in the Atlantic Writing Competition’s children’s book category. And as if he wasn’t talented enough with his painting, Will also plays guitar and piano, and recently won a folk-song competition in New Zealand!

But what Will wants most are to be a professional artist and to live on an off-the-grid farm where he can build forts in the woods with his kids and grow vegetables to support his vegan lifestyle. He says “I feel fortunate to be part of such a cohesive and supportive community where there are so many great opportunities for artists. I am particularly grateful to the library for letting me display my work.”

I wish you all the best with your many talents, Will. Your art is fresh and fun, and I hope people take the time to explore it. Your appreciation for the environment is inspirational. I applaud you for using your surroundings to create beautiful art and for sharing with your neighbours, both right next door and far away! Good luck, neighbour!